Learn the secret to making the best Hash Browns that are crispy on the outside and tender in the center. An easy recipe for homemade skillet hashbrowns for the perfect breakfast side dish. Watch the video tutorial and see how easy it is.

On the weekdays, we stick with super fast make-ahead breakfasts like Overnight Oats, but on the weekends we take a slower pace and fire up the stove to cook everything from Omelettes to Crepes. If you are looking for some new favorite breakfast recipes, this crispy Hash Brown Recipe is a must-try. It pairs well with nearly every breakfast menu.

My sister Tanya is the person that made me love homemade hash browns. They were the best I’ve tried and her secret? Plenty of butter. It adds incredible flavor and crisps up the outside forming a crust that crackles lightly when you bite into it. I took it a step further and added bacon grease (yes, save that bacon grease the next time you make Bacon in the oven). Wow, it makes wonderful hashbrowns – better than any restaurant version.

Watch Natasha make these easy Hash Browns. You will be surprised at how easy it is and it’s sure to get on your regular rotation. Now go forth and cook!

How many potatoes should I use?

The key for perfectly cooked hashbrowns is to keep the hashbrowns to about 1/3 to 1/2-inch thickness in the pan, otherwise, they won’t crisp up and cook through properly. Here are the guidelines we follow:

Pro Tip: To cook hashbrowns, use a coated non-stick pan or a seasoned cast iron so the potatoes don’t stick to the pan.

How to Make Hashbrowns

How to squeeze water out of potatoes

Removing the excess water is critical to getting the crispiest hash browns. Here are some methods to try. The cheesecloth method is the quickest and easiest.

Should I stir hash browns?

You want to give the potatoes a chance to sizzle and crisp up before you flip the potatoes. Just keep an eye on them to ensure your heat isn’t too high and avoid burning potatoes. Otherwise, it isn’t necessary to stir the potatoes, just flip them halfway through cooking.

Can I add onions?

I have tested this with fresh chopped onion and the onion tends to scorch on the skillet and there’s a hint of burnt flavor. Adding onion powder provides enough onion flavor without the burning issue. You can add fresh chives as garnish afterward if you want even more onion flavor.

What are the best potatoes for hash browns?

Russet potatoes are the most common potatoes for hashbrowns. They crisp up better than waxy potatoes. That being said, you can still make delicious hashbrowns with Yukon gold potatoes if that is what you have on hand.

Hash Browns are one of our favorite breakfast sides. They pair well with:

Homemade Hash Browns are inexpensive and easy to make and such a treat. Sometimes all you need on the side is a little ketchup to dip them into (they taste like the best part of French Fries!). How do you love your hash browns? I would love to hear from you in the comments. 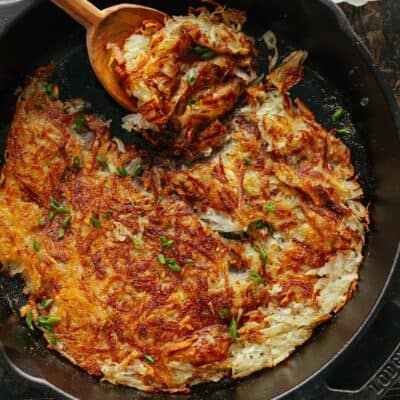 Here’s the secret to making the best crispy Hash Browns – the perfect breakfast side dish. These homemade hash browns pair so well with any bacon, eggs, and just about any breakfast entree. This recipe is written for a 10-inch skillet.

How much potatoes to use: 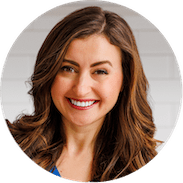