This fluffy whipped cream and cream cheese frosting is the perfect cupcake frosting. This vanilla frosting is easy, lightly sweet, pipes beautifully, and keeps well in the refrigerator.

This is our go-to frosting for our Perfect Vanilla Cupcakes. A single recipe will frost 24 cupcakes but it’s easy to double the recipe if you’re making a big batch for a birthday party. 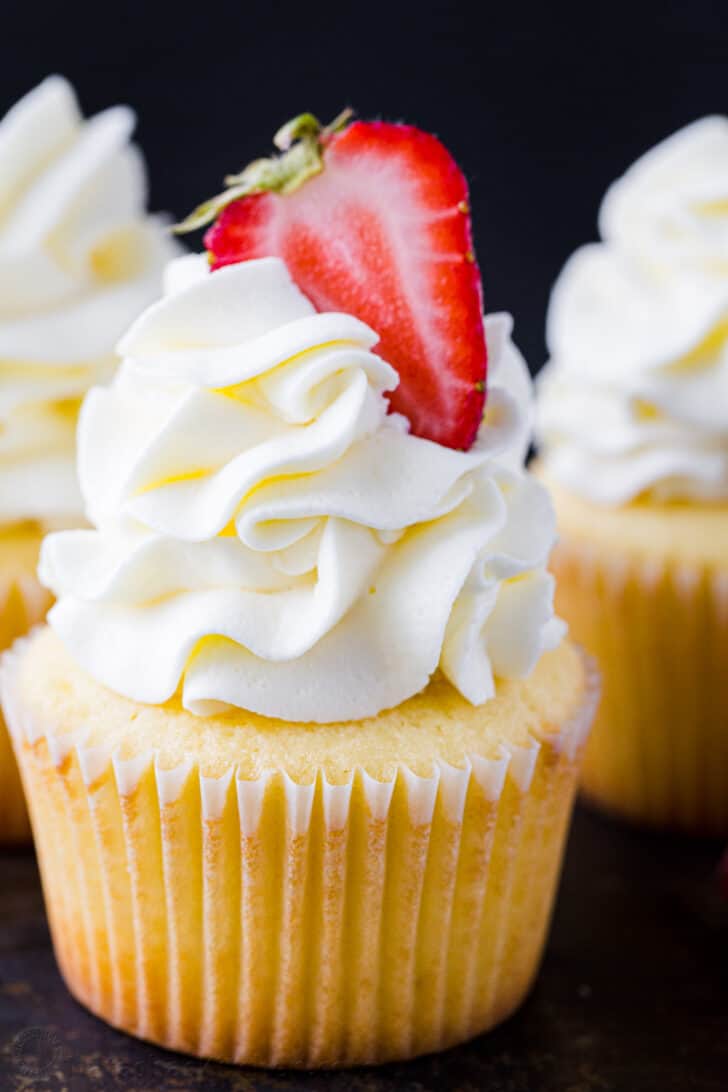 This frosting pipes so beautifully onto cupcakes, cakes and even cookies! I used the Wilton 1M Tip with a large piping bag. These 3 piping tips are the only ones I use for frosting cupcakes. Watch the video below. If it doesn’t load, be sure your ad blocker is turned off.

Flashback: as a child, I used to hide in the pantry and sneak spoonfuls of canned frosting [gross]; there’s something about the store-bought one that was just terribly irresistible. Maybe all those fabulous chemicals? Well, take that irresistible trait, minus the chemicals, and you get this frosting.

It also stays put pretty well in the fridge for, well, mine has been in there a week and I’ll go poke my finger in it. Be right back……… ok that’s just ridiculous. It’s still good!

Combining cream cheese and whipped cream creates a soft and airy frosting that keeps its shape when piped. Make it once and you will make it over and over. 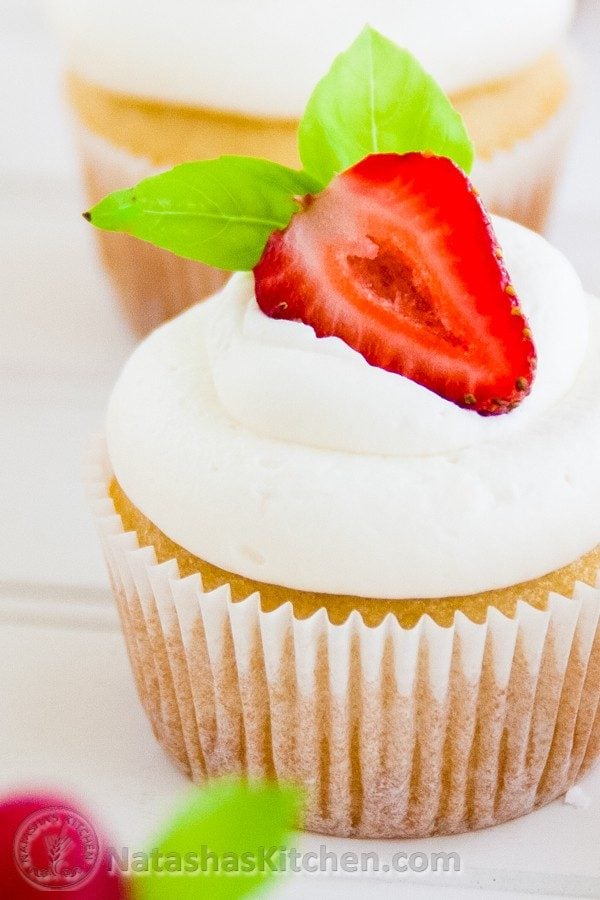 How to Make the Cupcake Frosting:

Cooks Tip: For best results with whipped cream, freeze your mixing bowl and whisk attachment 10-15 minutes before using. Also, keep the heavy whipping cream refrigerated until ready to use. 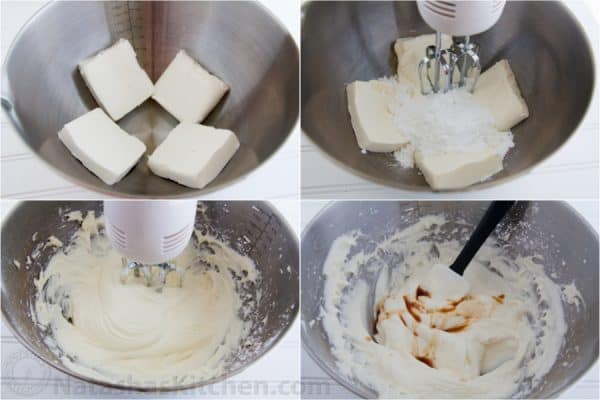 That’s it! Just three steps and you’ve nailed it! Keep it covered in the fridge until ready to use on these Vanilla Cupcakes, our moist Chocolate Cupcakes, or even these super fluffy Pumpkin Cupcakes. 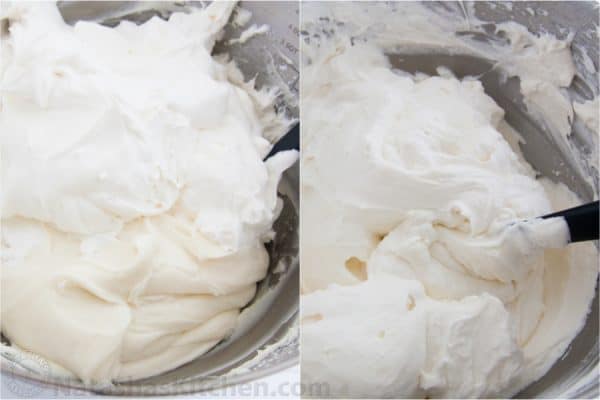 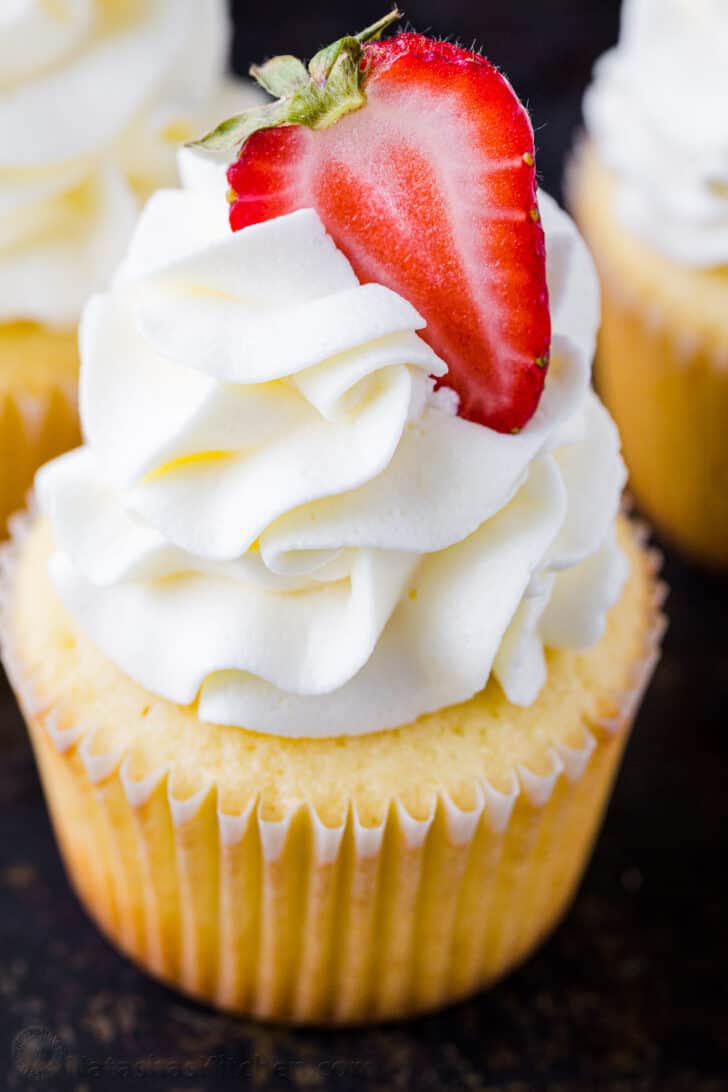 Can I Use this to Frost A Cake?

You’ll fall in love with this frosting and naturally, you’ll want to use it on all your desserts. This makes enough frosting for a 2-layer, 9-inch cake. If you want a super generous amount of frosting, or if working with a 4-layer cake, you can make 1 1/2 times the recipe.

If you love to change up your cupcake frosting, try these top-rated frosting recipes. We have everything from rich chocolate frostings to marshmallow-soft creams. 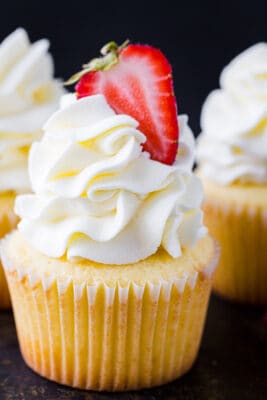 Our go-to cupcake frosting recipe. This vanilla frosting always gets rave reviews and doubles as a perfect cake frosting!

We first published this recipe in June 2012. We re-photographed and added new photos. After much testing, we now use 2 cups of powdered sugar instead of 1 1/2 since it gave the cream a better structure. 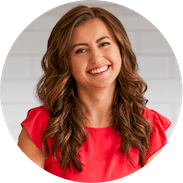