Chicken Chili is the ultimate cozy comfort food and a recipe you’ll have on repeat in Fall. Tender shredded chicken simmered in a creamy and hearty base is so inviting, especially topped with cheese that melts into the hot chili. It also reheats well so it’s a great make-ahead recipe for meal prep.

We love Chicken chili and we’ve made every variation from Crockpot Chicken Chili to Instant Pot Chicken Chili which produces the most tender chicken. Whichever is your favorite cooking method, this recipe is a crowd-pleaser.

If you enjoyed this video for Chicken Chili, please subscribe to our Youtube Channel (P.S. Click the BELL icon and be the first to know when we post a new video). Thanks for subscribing!

Pro Tip: To save time, use leftover cooked chicken breast or use a store-bought rotisserie chicken. Chili is the best way to repurpose leftover chicken and it never tastes like leftovers.

How to Make Chicken Chili

Can I substitute chicken breast?

You can easily substitute with a cooked rotisserie chicken, just shred the chicken and add it to the pot when you would normally add the shredded chicken back into the chili. Chicken tenders would also work well.

Can I make the chili thicker?

If you prefer a thicker chili, you can leave the lid uncovered during the 20 minute cook time to allow more of the steam to escape.

This chili is very mild. To make it spicier, you can add more chili powder.

Can I cook this in a crockpot?

You can slow cook chili, letting it putter away in a crockpot for several hours. We have print-friendly instructions for Slow Cooker Chicken Chili.

Can I make chili in an Instant Pot?

Lucky for you, we’ve already tested this and posted a tutorial for Instant Pot Chicken Chili. It’s super fast and the chicken becomes super tender.

We love to serve this as a main course paired with:

There are so many ways to dress up a bowl of White Chicken Chili. Let me know about your favorite toppings in the comments below.

If you’re looking for simple, family-approved recipes to add to your regular rotation, here are some of our top-rated dinner ideas. 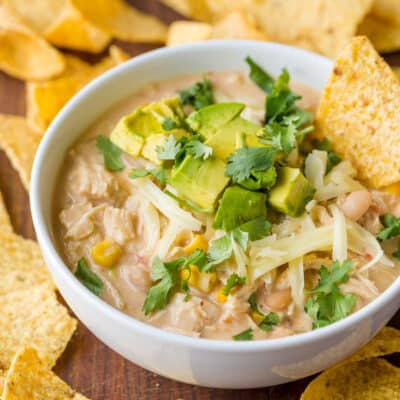 It's so comforting to curl up with a bowl of Chicken Chili. This chili is great served with tortilla chips or baked potatoes. The combination of tender shredded chicken simmered in a creamy and hearty base is so inviting. Add your favorite toppings like diced avocado, shredded Monterey Jack cheese, and chopped cilantro.

*Dry ranch packets come in 0.4 to 1.5 oz packages depending on the brand. Use enough powder to normally make 2 cups ranch.