Baked Ham with an Apricot Honey Glaze is a show-stopping roast that is simple to prepare, tender and so juicy. Watch the video tutorial and make this baked ham recipe for your Thanksgiving, Christmas, or Easter dinner.

We love serving beautiful roasts for the holidays that make people’s eyes light up such as Prime Rib, juicy Roast Turkey, our top-rated Beef Tenderloin, and of course this glazed baked ham. Here is everything you need to know about buying and baking an impressive ham (It’s easier than you think). 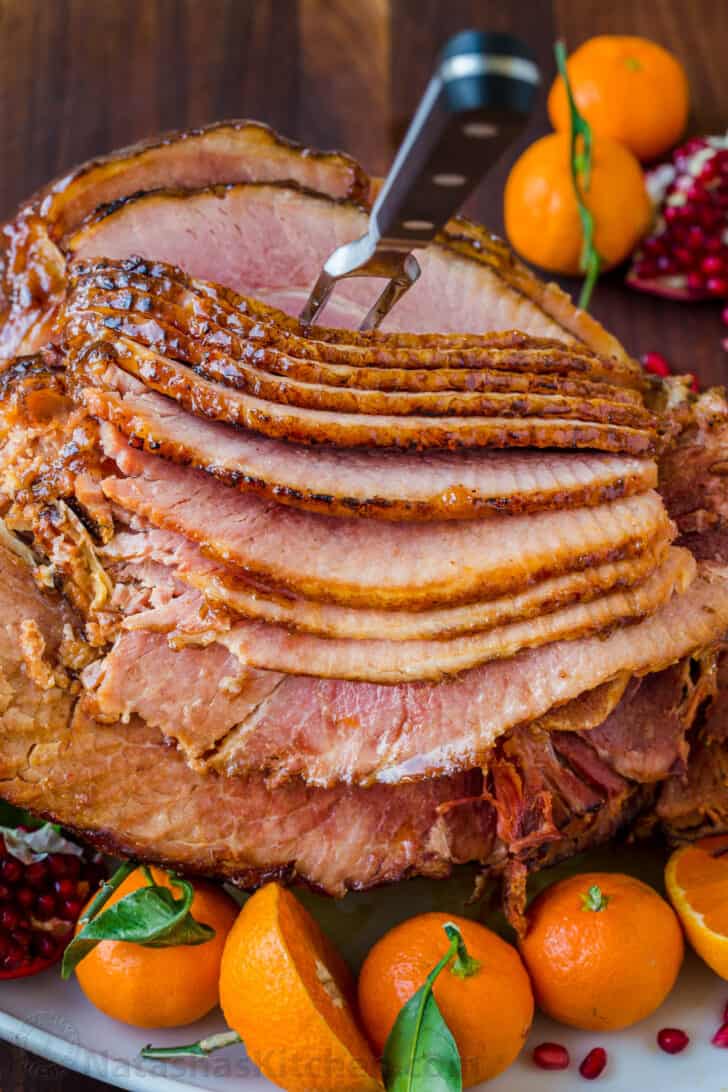 The glaze makes this ham! The glaze is simple and the flavors just work with apricot preserves, honey, brown sugar, dijon mustard, and butter. It comes together fast and creates a beautifully caramelized exterior. It also makes the pan drippings taste incredible which we pour over the ham slices when serving. 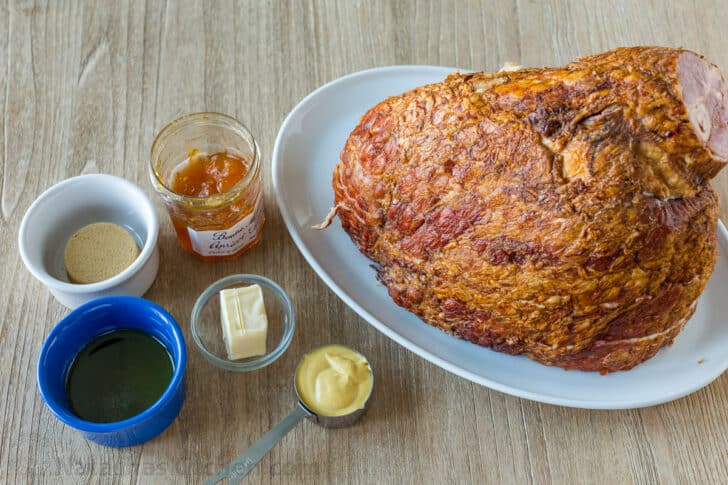 How to Buy a Ham:

The ham we purchased was an 11 1/2 lb, bone-in, cut from the shank end, spiral-cut ham. When shopping for a ham, consider the following questions:

Bone-In or Boneless? Bone-in will give you better flavor and nicer texture. Boneless can be a little spongy because it’s reshaped after the bone is removed to keep it from falling apart and look more appealing.

Shank end or Butt End? Ham is the back leg of pork. A full ham sliced in half will result in the shank end and the butt end. The butt end is the upper part of the ham and tends to be more tender and flavorful, but the bone also includes the hip bone, making it difficult to carve around. The shank end is the lower part of the ham and has a straight bone, making it much easier to carve.

Smoked, Cured or Fresh Ham? Most hams will come fully cooked and just require reheating and an added glaze. Smoked versus cured is based on personal preference.

Whole or Spiral Cut? This is based on personal preference and your ham source. Our local source only sells them as a spiral cut which makes it much easier to serve, but un-sliced ham can be juicier. 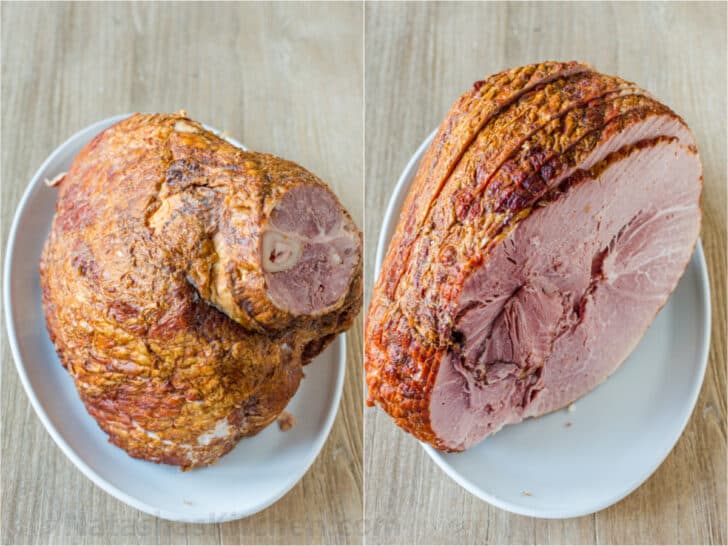 Where to Buy a Ham?

We have not had good success buying ham in big-box grocery stores. They tend to be overly salty with added water and you generally get what you pay. Our advice: buy the best you can afford. It’s absolutely worthwhile for the holidays and special occasions.

Locally, we purchased one at the Boise Bistro Market and paid about $9.50 per pound. If you don’t have a great local source for ham, look to the national chains such as Honey Baked Ham and they will even ship it to you if you don’t have a pickup nearby.

Pro Tip: Order your ham in advance to reserve one and ensure you’ll have the best ham for your holiday dinner. If you wait until the last minute, you run the risk of your ham supplier running out, especially during the busy Thanksgiving, Christmas and Easter holidays. 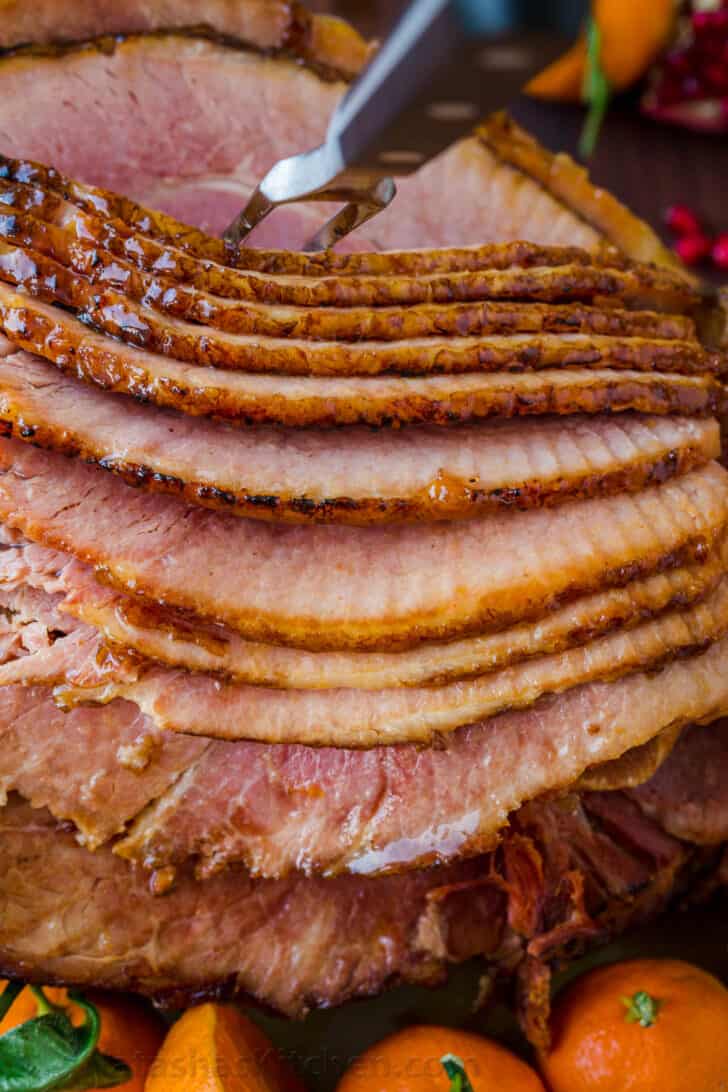 How Long to Bake a Ham?

If baking a fully cooked ham (whole or spiral cut) it just needs to be reheated. The USDA recommends heating to 140˚F after a 3-minute rest.

A ham that is “partially cooked” or labeled “cook before eating” needs to be cooked to a safe 160°F to ensure that it is fully cooked through. If you aren’t sure, always ask the butcher or deli department where you are purchasing your ham for specific heating instructions.

Pro Tip: Most hams are sold fully precooked and can easily be overcooked. Since not all ovens or hams are created equal, we highly recommend using an oven-safe meat thermometer. 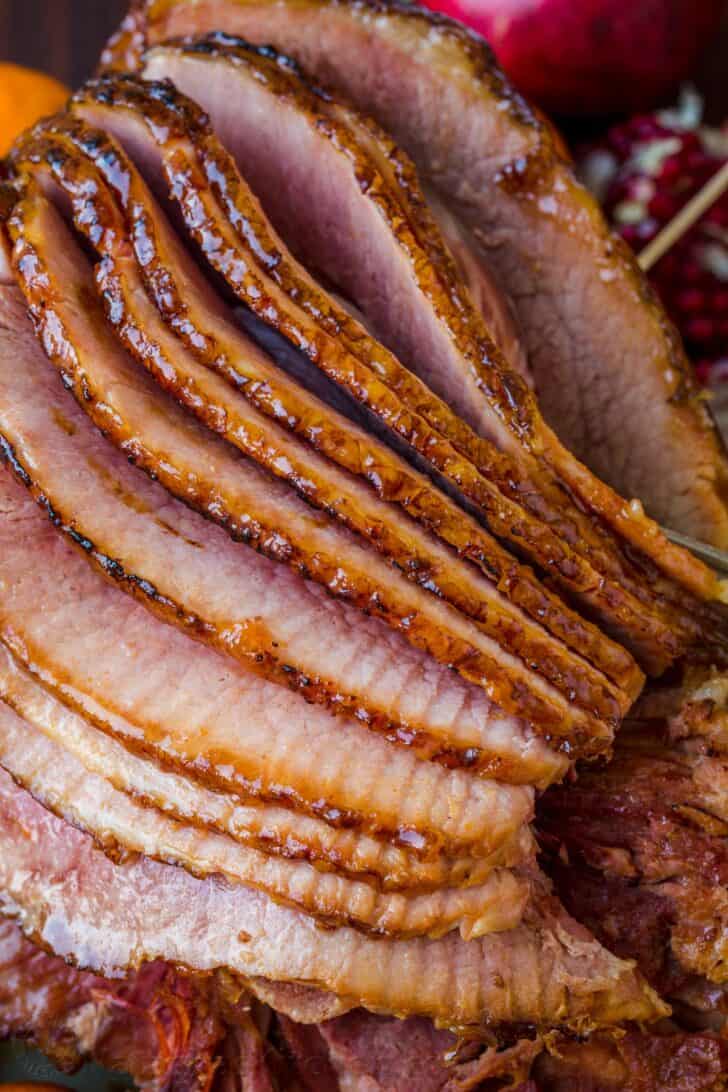 How to Reheat Ham in a Slow Cooker:

We love to reheat ham in the slow cooker and leftover ham (or a smaller 5-6 lb ham) will easily fit the width and length of a larger crockpot while still being able to fully close the lid. To reheat ham in the slow cooker, place cut-side down and pour over all of your glaze or pan drippings. Place on low heat for about 30 minutes per pound of ham (about 3 hours for a 6 lb ham) or until the internal temperature reaches 140˚F.

Baked ham pairs really well with these holiday-worthy sides for a truly memorable feast. We love pouring the pan drippings over the ham so it really doesn’t need gravy.

Watch How to Bake a Ham:

Watch Natasha’s video tutorial for how to bake a ham and you’ll see how easy this is. Make sure you use an oven-safe meat thermometer for perfect results every time.

If you enjoyed this Glazed Baked Ham Video tutorial, be sure to subscribe to our Youtube Channel and click the bell icon so you can be the first to know when we share a new video tutorial. THANK YOU for subscribing!

Here’s a quick summary to reference for this glazed baked ham.

Baked Ham with the Best Glaze 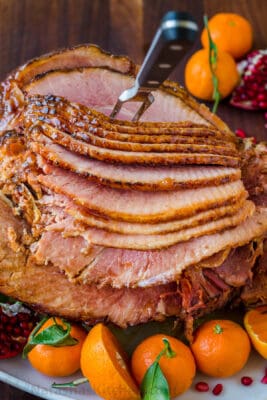 Baked Ham with an Apricot Honey Glaze is a show-stopping roast that is simple to prepare, tender and so juicy. Watch the video tutorial and make this baked ham recipe for your Thanksgiving, Christmas, or Easter dinner.
Author: Natasha of NatashasKitchen.com
Skill Level: Easy/Medium
Cost to Make: $ varies by size and quality
Keyword: baked ham
Cuisine: American
Course: Main Course
Calories: 430
Servings: 20 people