Homemade clam chowder is easy and such a treat. It is creamy, but light and so satisfying. This creamy clam chowder recipe is loaded with tender clams, silky potatoes, and crunchy bacon.

Creamy soups are such a treat. I fell in love with them on our honeymoon in Mexico where we enjoyed 5-star dining for the first time in our lives. It’s so fun to recreate restaurant-quality dishes at home like this Zuppa Toscana Recipe, our Chicken Wild Rice Soup, and definitely Chicken Tortilla Soup.

This clam chowder is hearty and loaded. Nearly every bite has clams in it which is awesome because what you get at restaurants is very little clams and veggies but just a ton of cream. I find homemade clam chowder is so much more enjoyable than dining out.

It’s a recipe that’s actually way easier to make than you might think! Make this bowl full of comfort next time you crave a soup to warm you up on a cool night. This recipe has rich flavor and is even better than Panera’s clam chowder!

What Is Clam Chowder?

This creamy clam chowder recipe rivals the best clam chowder I have tried and it’s not as guilty with only 1 cup of cream for the entire pot, but it sure tastes indulgent (WINNING!). It has simple ingredients with minimal prep. You can start with fresh clams if you wish but using canned clams is so easy and less expensive than purchasing clams by the pound.

Don’t let this seemingly long list of ingredients scare you away from this clam chowder recipe. Odds are most of what you need is already tucked away in your pantry.

The SECRET INGREDIENT: The cilantro on top is brilliant – an idea I picked up from my favorite restaurant clam chowder. Try it and you’ll want to top all of your clam chowders with bacon and cilantro forever!

How To Make Clam Chowder

Homemade clam chowder is creamy, hearty and so satisfying. All you need are some crackers or Dinner Rolls to soak up that chowder. 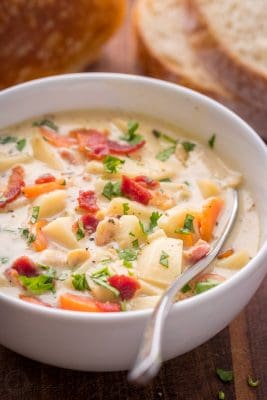 Homemade clam chowder is easy and a real treat. It's creamy, but light and so satisfying. This creamy clam chowder recipe is loaded with tender clams, silky potatoes and crunchy bacon.

The soup will thicken more as it cools. If needed, you can thin it out by adding more milk or chicken broth and bringing it to a boil once more.

From indulgent to super-food-healthy, check out all of our top soup recipes here. I hope you find some new favorites! P.S. This is our kids favorite soup of all time!

Q: What is your all-time favorite comfort soup?  We would love to hear from you in a comment below! 🙂